About OT in the Internet Age

Ornamental turning has grown tremendously in the past fifteen years as portable devices connect people with shared interests to sites with increasingly compelling content -- YouTube, Facebook, Pinterest, Instagram and others all came to life over just a few years time. This spawned countless pages detailing every aspect of ornamental turning by enthusiasts and practitioners sharing photos and video of their work, process, tools, machines, and more. Communication blossomed beyond the email of yesteryear into various online discussion groups while text messaging, Skype, Facetime and Zoom has connected newbies and experienced turners throughout the world.

Classic OT books (and many obscure ones as well) became instantly available and searchable through Google Books' ever-expanding instantly available library. The American Association of Woodturners incorporated ornamental turning at its annual symposium and published dedicated articles on OT in its American Woodturner magazine. SOT and OTI Newsletter now printed (or provided digital versions) in full-color and high resolution. All the while, John Edwards (former president of the SOT) steadfastly published some of the most detailed and illustrious compilations on all facets of ornamental turning.

The global financial crisis of 2008 forced most galleries to close their storefronts, leaving makers and collectors few options but to find each other directly online or in-person at woodturning symposia.

Locating and purchasing ornamental turning machines and tooling through eBay continued while new sites dedicated to the workshops of ornamental turners emerged. Toolmakers such as Fred Armbruster, Al Collins, Adrian Mounsdon, David Lindow, Erbschloe-Musterman, Mandala Rose Works and others with exceptional skills and access to increasingly affordable ways to fabricate, produced incredible lathes and apparatus based on earlier centuries' designs. Others, such as Jeremy Soulsby, Jean Claude Charpignon and the co-creators of the M.A.D.E lathe amazingly built machines and tooling capable of producing the fixed-tool work of the 16th Century Coburg Ivories, whose secrets of production had seemed long lost.

Furthermore, in 2007, an inexpensive kit to quickly and affordably build a tabletop rose engine lathe was made available for the first time in history. The brainchild of Paul Fletcher, and produced by Jon Magill and Bonnie Klein, this put within reach of anyone interested the ability to create decorative items using the same turning techniques of centuries ago.

At the same time, computer-controlled motors with software-based applications began to be used to emulate OT designs. Dewey Garrett invented his own software and produced a variety of items that eclipsed the capabilities of even the most complete OT kit. Bill Ooms soon followed with his own unique software and designs. Instructions to do the same have been circulated and are sure to lead to more developments. Along with ever more sophisticated Maker Spaces that share the latest in CNC, laser cutting and 3D printing, ornamental turning is likely bound for new directions.

The result has been an explosion of interest in ornamental turning!

This group! It’s almost torture to see these beautiful ornamental turning machines not in my shop! LoL! Keep tempting, I can stand it. I hope. 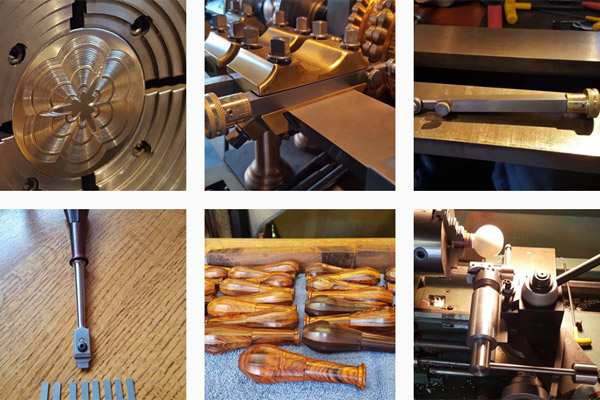 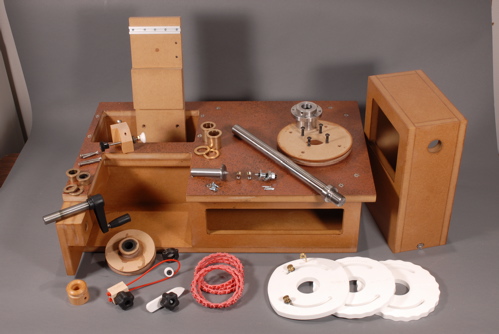