Turners of the Early Modern Period in Bavaria 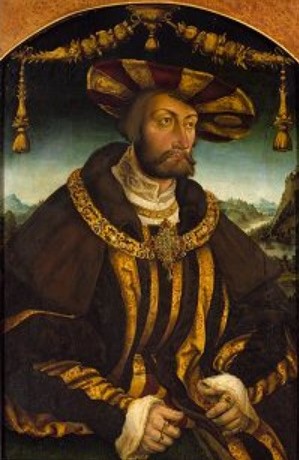 William IV was known to have created artistic turned works which were housed in a special room equipped as a turning chamber in the Neuveste, a castle erected in 1385 in what was then north-eastern Munich. 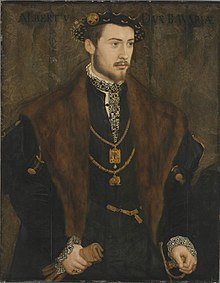 In 1546, Albert and his father William IV ordered the construction of Dachau Palace (completed 1577), a Renaissance style four-winged palace with a court garden which eventually become the preferred dwelling of the rulers of Bavaria.

A conically turned goblet with a lid bearing the coat-of-arms of Albert V made around 1570 may have been made by the Duke himself. His son William also learned turning. 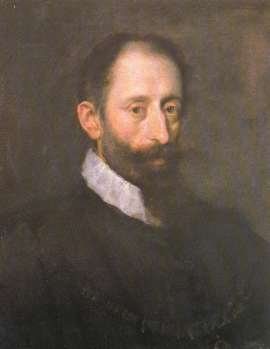 William V was born in Landshut, the son of Albert V. He was instructed in turning by Giovanni Ambrogio Maggiore who was known to be at the court in 1574-1575. On New Year's Day 1575, Prince William presented his sister in Graz with a small oval ivory box with portraits in tapestry of two of the Prince's children (dated 1576). He was also known to create hollow spheres.

William V ruled from 1579 until 1597, when he abdicated to his son Maximillian I.

In 1582, William is known to have sent a "Kontrafetkugel" (a turned series of nested ivory balls similar to Chinese balls) to Francesco I de' Medici, Grand Duke of Tuscany. It was likely made by Giovanni Ambrogio Maggiore, the first turner known to have produced such a technical feat.

Maggiore was an Italian turner who traveled from Milan to Bavaria in 1574 and stayed in Munich and Landshut for long periods on at least four occasions. He taught William V at the lathe and it is likely that he also trained William's son Maximilian at the lathe.

In 1573, Maggiore had turned oval ivory frames for William V and maintained that he had invented this technique. He had also turned hollow spheres by 1582. One example, dated 1588, is preserved at the Museo degli Argenti in Florence. Maggiore passed on the oval frame turning technique to his pupils including George Wecker as early as 1576.

Little is known of the later life of Maggiore, other than these brief accounts: From Milan, he thanked William for a gift in 1593, and in 1595 Paolo Morigi praised him as a successful Milanese artist. He also worked in Florence and Rome. In 1597, Grand Duke Ferdinand I de' Medici recommended Maggiore, where he was still creating commissions for the Medici court (Florence) in 1598. 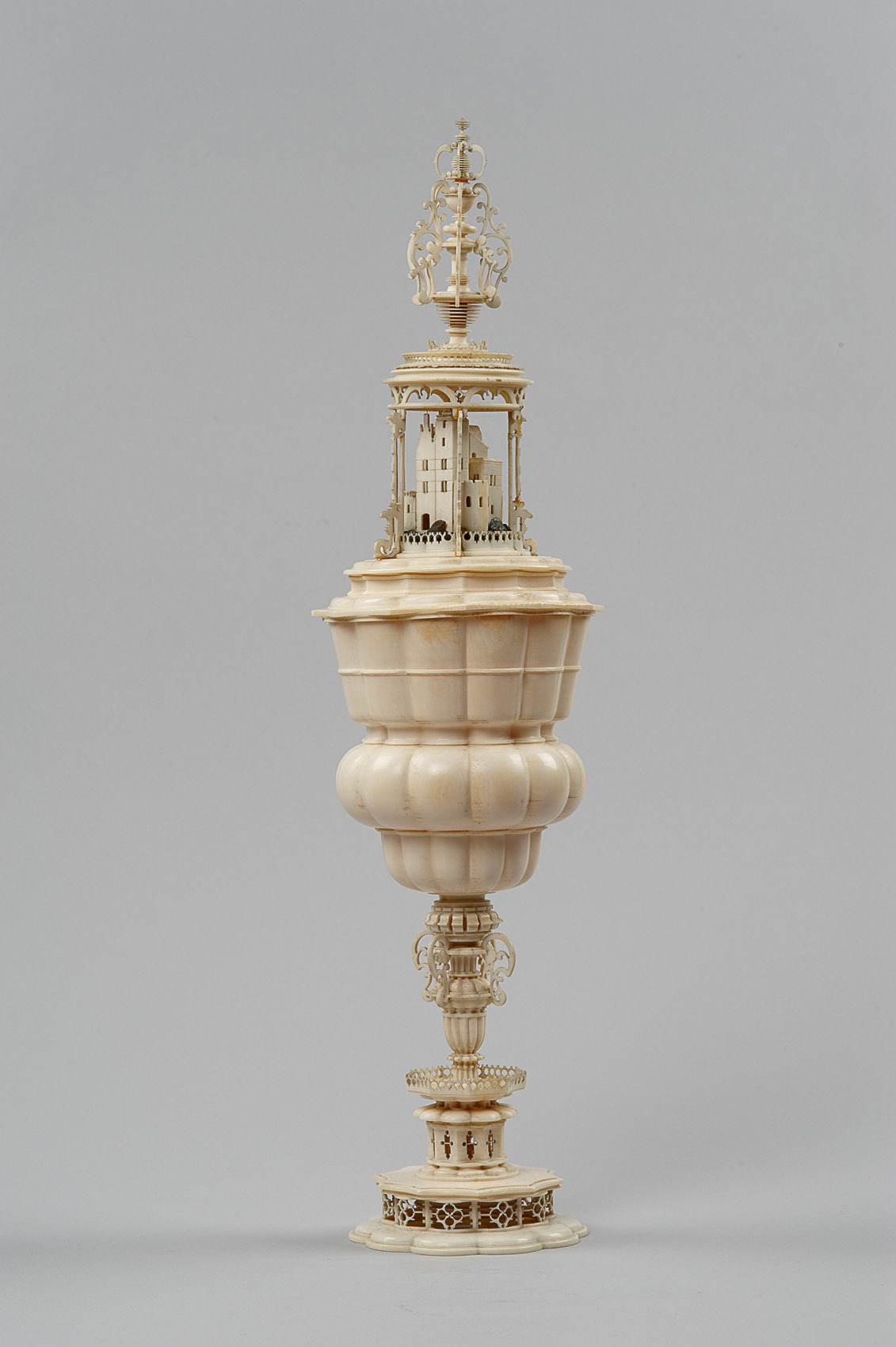 Georg Burrer was active from 1597 to 1627 in Stuttgart. A covered cup atop a hollow sphere dated 1616 is preserved in the Natural History Museum in Vienna, along with other turned ivories. Another work of his remains at the Galleria Regionale della Sicilia. An elaborate ivory automoton in the form of a ship, dated 1626, can be seen here. 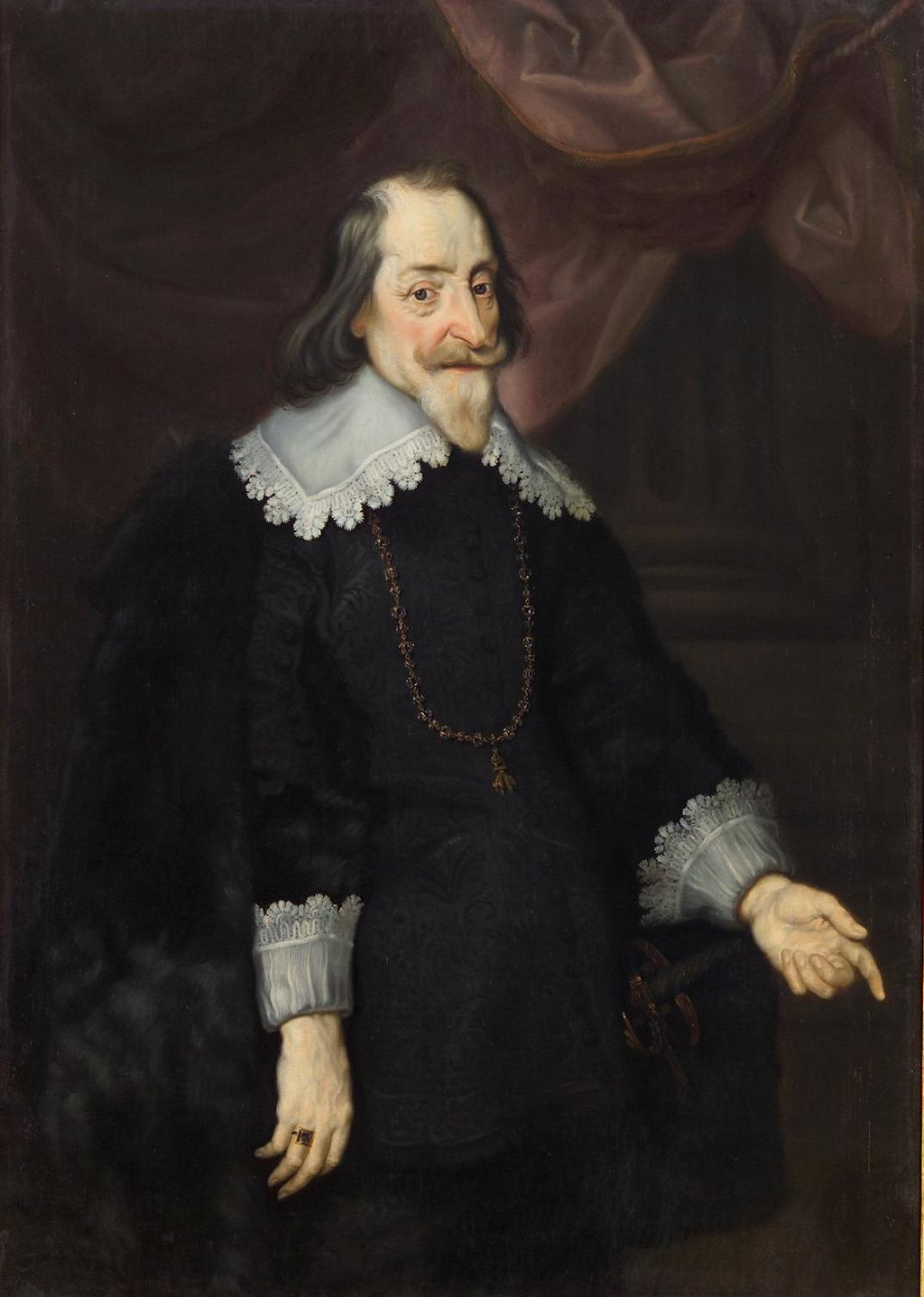 Portrait Maximilian I, Elector of Bavaria, by Joachim von Sandrart, 1643

Maximilian I, the son of William V, ruled in Bavaria as Duke from 1597 and then as Elector from 1623. He was a prolific and accomplished turner, initially taught by Giovanni Maggiore, who was known to be at the court in 1585 when Maximilian was twelve years old.

A 1611 account by Augsburg art agent Philipp Hainhofer states that Maximilian loved horses, hunting, jewels and art, and pursued turning as a personal hobby; in all these activities he spared no cost. 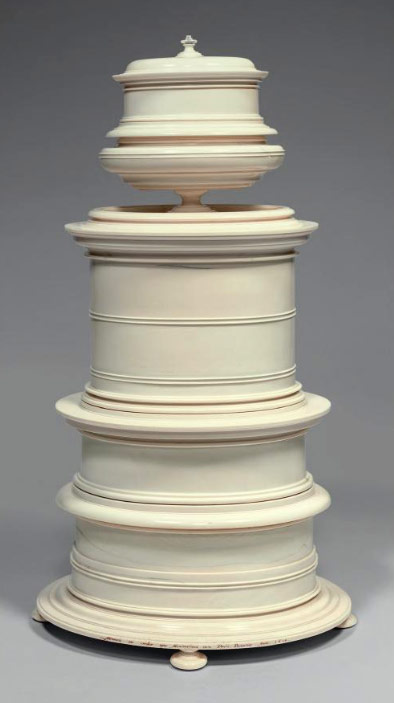 The many ivories he turned himself were exhibited in the art chamber (now the Mint Building) and later were transferred to a gallery adjacent to his apartment in the Munich residence. Maximilian's turned objects were mentioned in their own section of inventories from the late 1620s onward, as "oval pieces of ivory and ebony turned vessels by His Highness, the Elector."

He was clearly quite proud of his turning skills, as seen by an engraving on a candlestick dated 1608 which translates as, "Art ennobles ivory; the creator (of this vessel), Maximilian, Duke of Bavaria, on the other hand, ennobles art."

Photo details: The canister is inscribed, "You might think I was made by Mentor [the famous turner of Antiquity], but I am a work from the hand of Maximilian, Duke of Bavaria, in the year 1610." 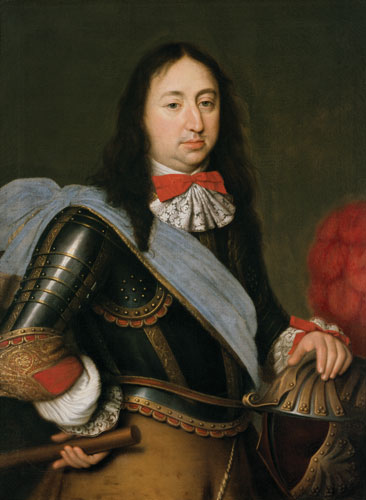 Maximilian's son, Ferdinand Maria, began training at the lathe at eight years old. Seven years later in 1651, and still a minor, he became Elector. He was officially crowned in 1654. A covered cup made by Ferdinand Maria in 1655 still survives. 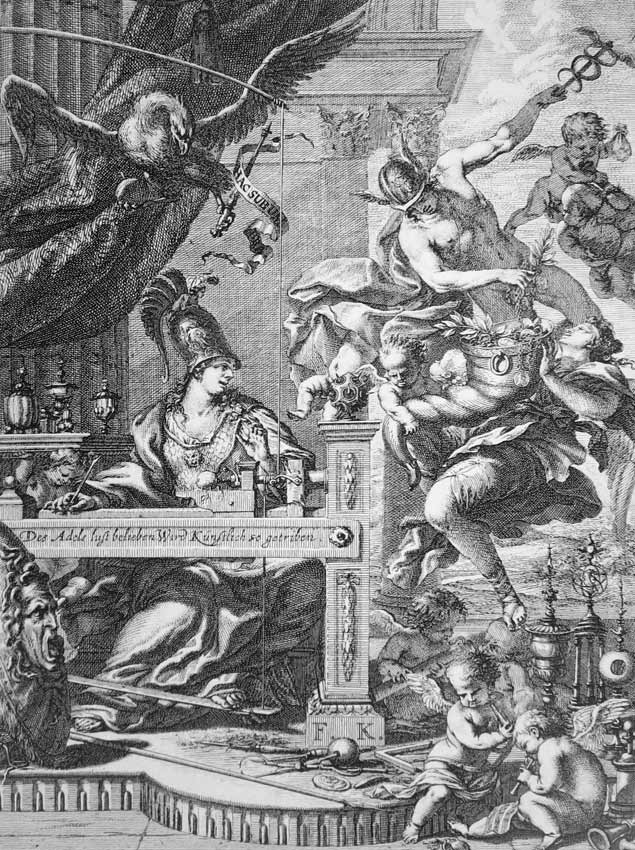 Kleinert was a turner and artist who came to Nuremberg in 1664 and was recognized for his work by 1668. Surviving pieces include several detailed medals he created of court royalty.

Kleinert also wrote a hymn to turning in 1683 with words carved into the front of a lathe. The translation reads, "The pursuit of such is to please nobility's fancy" as if to prove that the turning of ivory was a noble pastime.

Unfortunately, Kleinert lost his fortune in poor investments and died impoverished in Nuremberg.

Johann Wilhelm was probably instructed by his court turner Georg Steiner. He also employed ivory carvers Ignaz Elhafen and Antonio Leoni, who likely assisted with the finer details of his turnings.

His brother-in-law was Ferdinando de' Medici (in Florence), where the famous Coburg collection of turned ivories had arrived in 1633 as spoils of war from the city of Coburg, and where famous turners Heiden and Eisenberg worked. Wilhelm's turning likely took inspiration from those, such as his turned ivory cup and cover, crafted when he was thirty years old. The elector probably continued his turning hobby into his later years as his archives detail acquisitions of ivory tusks through 1705.

Along with turned ivories, Wilhelm assembled a collection of ivory tankard sleeves, statuettes and reliefs, which are housed at Bayerisches Nationalmuseum in Munich. 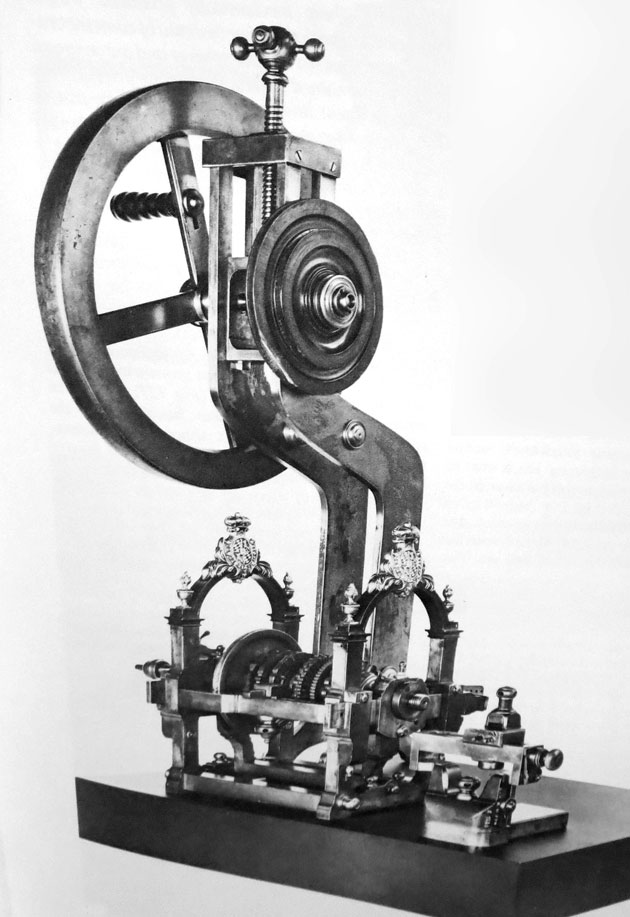 Ferdinand Maria's son, Max Emanuel, began turning at seventeen years old. The many pieces he created were destroyed during a fire at his Munich residence in 1729. However, some of his lathes still survive, including a rose engine made by Francois Houard in 1712.

During his entire reign Maximilian II Emanuel patronized the arts. 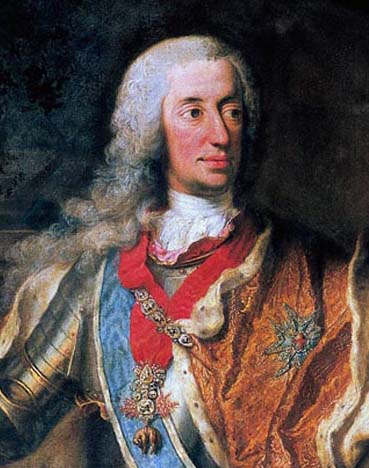 Charles VII took over government after his father Maximilian II Emanuel died. He was the Prince-elector of Bavaria from 1726 and Holy Roman Emperor from 1742 until his death in 1745. None of his turned objects have survived. Charles encouraged his son Prince Maximilian III to pursue turning.

Before and during Charles's reign numerous accomplished German, Italian, French and Bavarian architects, sculptors, painters and artisans were employed in royal service, often for many years. 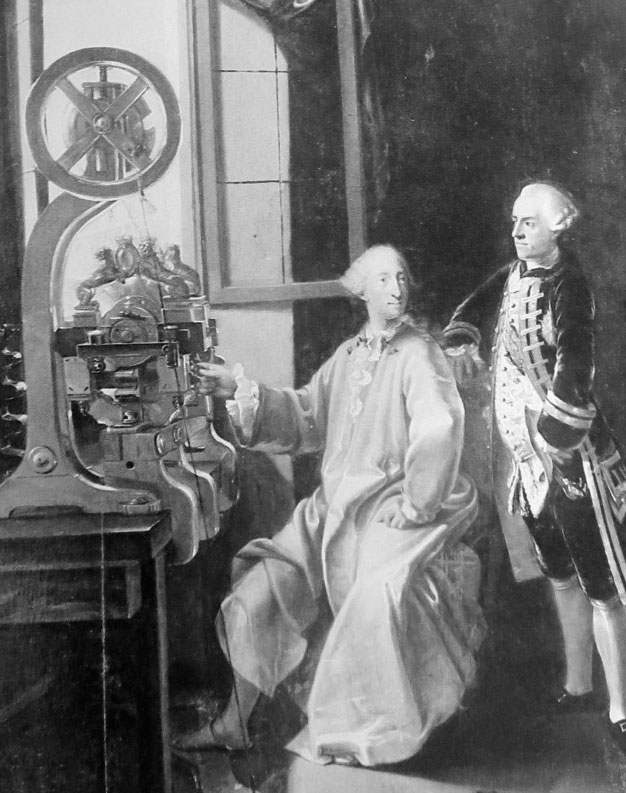 Portrait of Maximillian III at the rose engine lathe with Count Joseph Salern. Painting by Johann Jakob Dorner the Elder, 1765.

Maximillian III was encouraged to turn at the lathe by his father (Charles VII) and did so his entire life. He commissioned a portrait of himself at the rose engine in 1765. A vessel made by him dated 1770 also survives.

Maximilian was also skilled in music and is known to have brought Wolfgang Amadeus Mozart to his court. 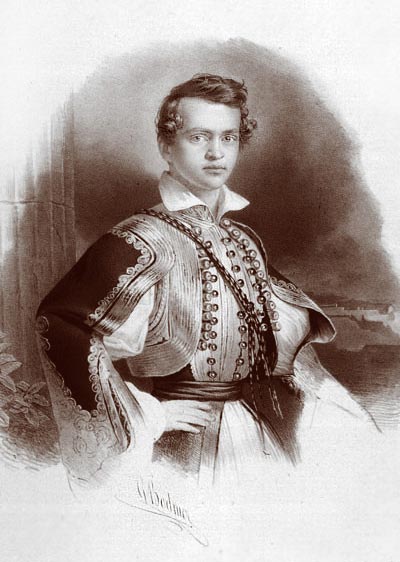 Portrait of Otto at a young age by Gottlieb Bodmer

Otto was the second son of King Ludwig I of Bavaria and became the first King of Greece in 1832 under the Convention of London. Not quite 18, the young prince arrived in Greece with 3,500 Bavarian troops and three Bavarian advisors. He reigned until he was deposed in 1862. A lathe dated 1829 which belonged to him is currently located in the New Prince-Bishop’s Residence in Bamberg, Germany.

According to the museum staff where it is housed, "It was usual for young princes of the Wittelsbach family (the royal Bavarian family) to learn a craft. In the eighteenth century woodworking was a favorite activity of this family. Otto, like many other members decided to be a turner and he learned this craft during several years with a master in Munich." 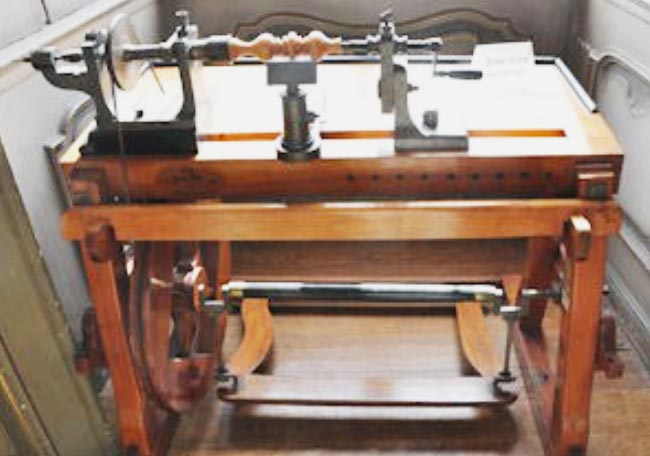 Lathe made for Otto to learn turning, 1829

"Maybe the lathe was a present for his fourteenth birthday. It was made in 1829 in Munich-Bogenhausen especially for Otto [as inscribed on the lathe]. Otto became King of Greece in 1832 and brought the lathe with him to Greece. Because of a Revolution Otto had to leave Greece in 1862 and along with other parts of his property the lathe came to the Residence in Bamberg were Otto lived until his death in 1867."