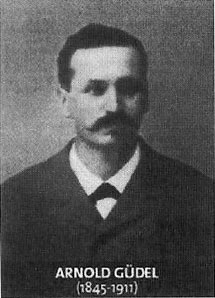 The Güdel company was founded in 1872 as Müller & Güdel in Biel/Bienne, near Bern, Switzerland. In 1877, it was entirely taken over by Arnold Güdel (1845-1911), who was an able technician and machine designer. The first machines he built were rose engine lathes patented by Alexandre Pelaz, an engineer from Geneva. During this time, the business became well-known. In 1886, they patented their brocading machine in Germany.

Originally, the Güdel products were mostly machines for watchmaking and jewellery. In 1910 his son Robert Güdel (1876-1949) took over the firm. It was Robert and two partners who changed the company into a Stock Corporation in 1925, and he ran the business until his death in 1949. 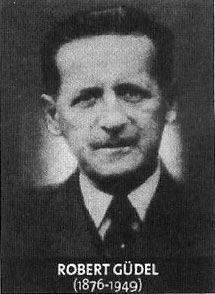 Güdel's main competitors, the Lienhard brothers in nearby La Chaux-de-Fonds, were taken over in 1960. At that point, Güdel started producing special machines for engraving. These were developed to become the Güdel-Lienhard reducing machines, a unique product that was sold worldwide and became the core product of their enterprise.

However, their focus changed in 1970 when they became Güdel Coin Technology and attempted to revitalise the Lienhard reducing machines. By 2009, they were no longer active.

This information was sourced from the Society of Ornamental Turners Bulletin #110 and Bulletin #142.