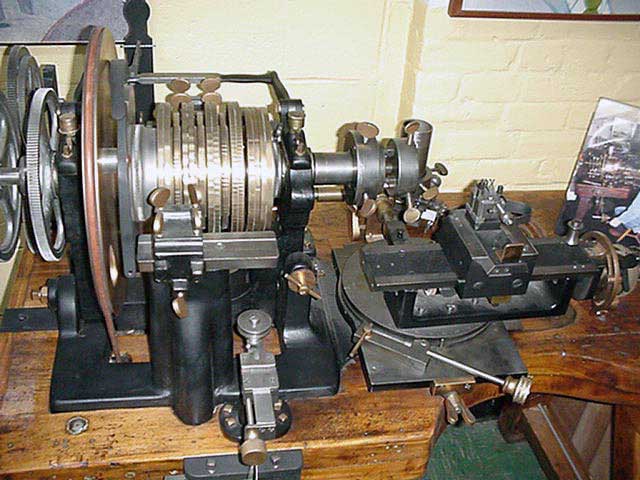 Robert-Alfred Lienhard was originally from Biel/Bienne, the same district as Güdel. He may have worked for Güdel prior to starting his own company thirty miles west in La Chaux-de-Fonds. It was here Lienhard began producing engine-turning machines for the local watch industry.

In the early 20th century, more than half the watches sold worldwide came from La Chaux-de-Fonds, with a population of about 40,000. It was the capital city of the district of La Chaux-de-Fonds in the canton of Neuchâtel, Switzerland. (Residents spoke french however, as they were located only a few kilometers south of the French border.) The town's layout and architecture is unique in that it intimately combines housing with workshops dedicated to watchmaking. This enabled everyone to share in production, which fostered the growth of the city and its industry.

In 1895 Leinhard started his company and registed his first machine patent. The brocading machine, along with other automatic guilloché and reducing machines were his main focus (at least through 1903). The first Leinhard rose engine and straightline machines were produced starting around 1900. 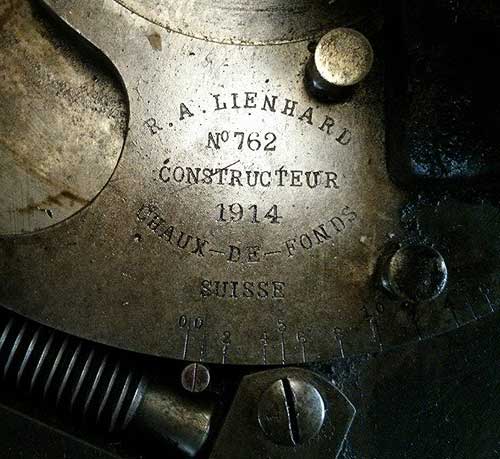 Many Lienhard rose engine lathes survive today and are still in use by the trade and OT enthusiasts alike. The pulley wheel is typically engraved "R. A. Lienhard, Chaux-de-fonds, Suisse," along with a serialized number and a manufacture date, often between 1905 and 1916. Some include a geared drive through a universal joint connected to the cross-slide, allowing patterns to be produced more quickly. (Other rose engines, which appear to be of nearly identical design, may have no markings. Perhaps these were other makers imitating Lienhard's successful design?) Early Lienhard machines were built on thick wooden tables with large cutouts that enable the worker to view the workpiece nearly head-on, facilitating not only better ergonomics than other engine lathes but also greater precision. Later models, starting around 1915, used cast-iron stands with smaller cutouts as they were less costly to produce.

The business was formally incorporated as R-A Lienhard & Co in 1920, with the owners being Robert-Alfred and his three sons, Alfred, Paul and Albert. The impetus for this may have been Robert-Alfred's failing health, as the company documents were modified within 11 months indicating his death.

Over the years, Lienhard produced a variety of machines for the watch-making industry, including straight-line engraving and engine turning machines, brocading machines with copy/reduction capability, various chuck and work-holding devices, pantographs to engrave letters, machines to cut steel dies, emboss or hollow work, automatic lathes as well as tool grinding machines. Nearly all of these appear in a December 1923 advertisement placed in "The Jeweler's Circular," a leading American trade publication for jewelry, silver, watch and clock businesses. In addition to these, they developed multiple-head machines capable of decorating multiple pieces at a time, although not many were made. In all, the 1920's were some of Lienhard's most productive years.

In 1960, they were taken over by Güdel, their main competitor from nearby Biel/Bienne. At that point, they started producing Güdel-Lienhard reducing machines, a unique engraving product that was sold worldwide and became the core of their enterprise. However, their focus changed in 1970 when they became Güdel Coin Technology and attempted to revitalise the Lienhard reducing machines. By 2009 they were no longer active.

A detailed history of Lienhard and Co. and the various machines they produced was recently authored by Nicholas Edwards and published in SOT Bulletin #142.