Below is an excerpt of a tribute by G. Brandon and W. Bourne from the Society of Ornamental Turners Bulletin #68: 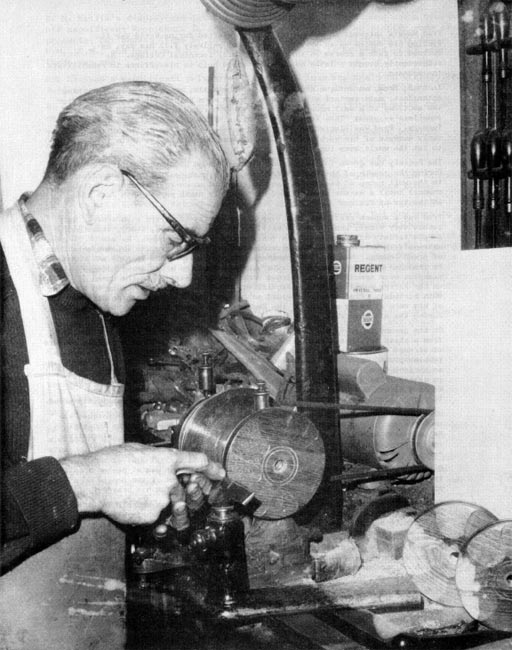 Fred Howe at his ornamental lathe.

Fred Howe's interest in ornamental turning started during World War II. Finding his duties as an Army P.T.I. did not entirely fill his day, he decided to take a course on turning at a local Technical College. He subsequently bought a lathe hoping this would help in his efforts to rehabilitate the wounded.

In 1948, Fred made contact with an antique dealer of Tunbridge Wells, an ornamental turning enthusiast, and four other turners whom he met for a cup of tea after the auctions at a well known sale room. This led to the creation of the Society of Ornamental Turners. Fred was elected Secretary and subsequently Vice President. An early example of his work was our Coat of Arms Board with its latin inscription to let the world keep turning.

Fred was a superb craftsman and above all an artist of a very high order. He became very widely known for his skill in manipulating exotic wood, ivory, stone and a wide variety of other materials ranging from nuts to leaves. He was extremely inventive and ingenious, transforming these materials into objects of great beauty. His skill at ornamental turning was second to none and he produced an amazing range of superb examples of the art. Among the examples were specially commissioned works for presentation to the Queen on her Silver Jubilee. Also a magnificent Tazza for the Queen Mother on her 80th birthday.

Fred always provided an impressive and ever changing display of his work at every meeting of the Society. He opened his house to the public during the old town week in Hastings. On the ground floor of his house he displayed over a thousand items ranging from a chess set to a Wassail bowl and a bowl of wooden fruit of many true colors of strange woods. His fund of knowledge of woods, ornamental turning apparatus and techniques was enormous and he was always willing to share this with members of the Society. He gave many talks on a variety of subjects all of which were very informative and encouraged very lively discussions at our meetings from which all our members benefited.