Below is an excerpt of a tribute from the Ornamental Turners International Newsletter, Vol. 22, No. 2: 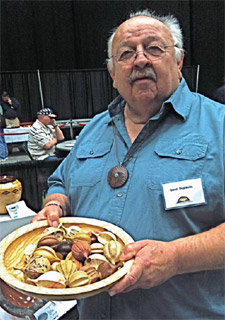 Gorst attended Arcadia Primary School and Christian Brothers College in Pretoria, South Africa where he participated in water polo, swimming, and rugby teams. He worked in South African copper and gold mines, and in business, before leaving South Africa in 1959 to come to the U.S. After working full time at an insurance company while attending Oklahoma City University. Gorst graduated in 1964 with honors of Blue Key, the President’s and the Dean’s Honor Rolls. He entered Oklahoma University Medical School, graduating in 1968, and accepted an internship at Presbyterian Hospital (Stanford Lane Hospital) in San Francisco. Following his internship and a residency in pathology at Presbyterian Hospital, he completed a residency in Diagnostic Radiology, having trained at Highland County General Hospital, Oakland, Cal.; University of California, San Francisco, Cal.; Children’s Hospital, Oakland, Cal., and Alta Bates Hospital, Berkley, Cal. He brought his family to New Orleans in 1977 and for many years was chief radiologist at Ochsner-St.Anne Hospital in Raceland, La. Gorst retired in 2013, bringing to a close his medical career of 43 years.

In retirement Gorst found opportunity to expand and develop the intense interest in woodworking that had inspired him ever since the 1950‘s. Throughout his lifetime he had expressed creativity not only in woodworking but in sculpture and building furniture. For the last 20 years he had been ornamenting wood , using exotic hardwoods, precious metals, and semiprecious stones. Among the various lathes housed within his workshop, he especially treasured an 1842 Holtzapffel ornamental lathe. He also was very proud of the lathe made for him by ophthalmologist Dr. Fred Armbruster, Maine.

Gorst was an extraordinary man devoted to his family, his medical career and his life as an artist. His artistic talent and creativity flourished during the last twenty years during which he was blessed with an ever-increasing ‘extended family’ of woodturner artists and colleagues from all across the country. It was through this extended family that he was able to more fully express his artistic talents and abilities, joy in sharing the concepts of design and skills, and the adventure introduced in new projects. Intrigued by the challenge of discovering solutions to seemingly unsolvable challenges, he saw beauty in the design of machinery and tools as well as the beauty he recognized in nature and all forms of art, ancient and modern.

Gorst was represented locally by the Arthur Roger Gallery. His work is included among the permanent collections of the Smithsonian; in the New Orleans Museum of Art ( he created the original spiral turned handles 62” in length that were afterwards cast in bronze, seen in the design of the gates of the museum); he created the Academic Mace that is now used in the Tulane University Graduation Ceremony; also included in the Woodturning Center of the American Association of Woodturners, Pa. and in various collections throughout the United States.

The only constant in my work is change, and relying on my intuition from previous experience and exposure. I am a student of the history of turning. I turn every day as it is the relaxation that I get in contrast to my ‘Day Job,’ the practice of medicine. I love what I do - and what I do is the fruit of my passion.