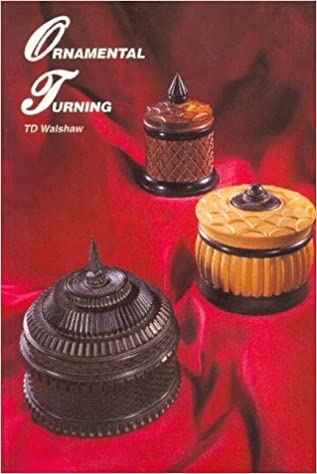 Tom Walshaw grew up in Scunthorpe, UK, in a family which had been crafting iron works for many generations. After graduating college he worked in the trade but was called upon to teach engineering design and thermodynamics during World War II. After the war ended, he continued to teach until an early retirement in 1972. This enabled him to pursue his various hobbies, the foremost of which was model engineering. On that subject, he wrote more than 200 articles and 20 books under the pen name Tubal Cain.

Another hobby Walshaw became very interested in was ornamental turning. He joined the Society of Ornamental Turners in 1972 and created many items, including an ivory turned box he produced for the Duke of Gloucester.

His important contribution was the book Ornamental Turning, originally published in 1990 and again in 1994 as a paperback edition due to its popularity. The book gave him recognition as a leading practitioner of the art of ornamental turning. More importantly, the nearly 200 drawings and photographs along with an approachable explanation of the subject provided an essential reference work for all turners, as well as a valuable survey of the art for collectors and others.

Walshaw owned several ornamental lathes during his lifetime, including Holtzapffel No. 484 and No. 2456, as well as a lathe by Joseph Fenn circa 1850. For a tribute to Walshaw, see the Society of Ornamental Turners Bulletins #99.