Below is an excerpt of an article written by Warren Judd when Bob was still alive: 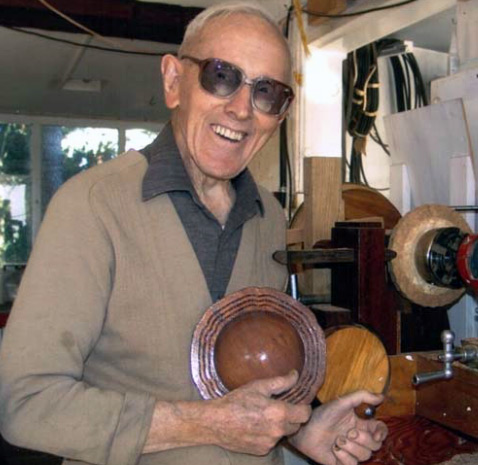 Discover the Museum of Woodworking and Ornamental Turning -- Modest in proportions and unostentatious in the extreme, it should not to be overlooked by anyone seriously interested in woodwork. It is owned by the Lynn Historical Woodwork­ing Trust, and inside there is a good chance of finding Bob Lynn, who lovingly looks after the collection.

Actually, he does more than look after it; he started the whole place, and makes it come alive. Author of Woodwork—My First 70 Years, Bob radiates enthusiasm for wood and the tools that fashion it.

“When I was six, I made up my mind to be a wood­worker as I watched the school being extended, and I earned my first money from wood when I was ten. Stools, plate racks, firescreens and potato mashers were my first items, and I also constructed a lathe of sorts as well,” he told me.

As soon as he turned 15, Bob took up an apprentice­ship in carpentry and joinery, and in 1943 started his own building business (partial deafness prevented him from military service), which came to specialize in joinery. Among the many large jobs it completed was the joinery for Parliament’s Beehive building, which ran over ten years. Now retired at 81, Bob shows no sign of quitting wood anytime soon.

Inside the museum are 700 woodworking planes, six of which have been firmly dated to 1752, over 2000 additional hand tools (including a saw made in 1600 that cuts on the pull stroke), 600 woodworking books, a collection of 1500 named species of wood, and 19 lathes. Bob also has 40 drawers of beautifully ordered and manicured tools for carving and lettering—he’s done plenty of both.

But it is amongst the lathes that we encounter the pride of Bob’s collection: ten original ornamental turning lathes—rarer than icebergs in Alice Springs, a collection second only to that held by the Science Museum in South Kensington, London.

The trust owns ten ornamental turning lathes: six Holtzapffels, two Gills, one Evans and one Davies. Along with the lathes is a collection of elaborate cutting frames—geared vertical, elliptical, epicycloidal to name but three—and a rare Holtzapffel horizontal lapping machine and treadle grinder. Plenty of examples of startlingly intricate ornamental turnery made locally are also on display, many in rare and exotic woods with the special cutting and finishing proper­ties ornamental turners require.

Bob Lynn is one of 14 who now do ornamental turnery in New Zealand, and all have learnt on the Trust’s lathes.This museum is one where everything works, and where the machines of the past create beauty and delight for new generations.

Since this article was written (about 20 years ago) the Museum has moved to "the Plains" and became a tax-exempt charitable  trust. The size of the collection has doubled, as a number of substantial  private collections have been gifted to the Museum in recent years. They acquired a beautiful Bower rose engine lathe with various accessories and have increased their overall collection by more than a thousand items!