Below is an excerpt of a tribute by John Edwards from the Society of Ornamental Turners Bulletin #118: 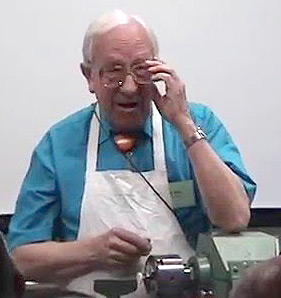 The passing of Bill Jones brings to an end the era of the 'ivory turner·. Bill was probably the last of this old school of skilled hand craftsmen, his career ending simultaneously with the curtailment of the ivory trade. Bill started turning at the age of 14, following in the footsteps of his father, grandfather and two generations before them. He worked as a turner for the whole of his life, apart from a 5 year break during the Second World War when he served as an engine fitter in the R.A.F., ending his service as a Drill Sergeant (can you imagine Bill shouting! - no, he was probably very polite - a bit like Sergeant Wilson in Dad 's Army). Bill started his own business in 1947 and didn't cease turning until shortly be fore his death.

In 1948 he joined the recently formed Society of Ornamental Turners and this revolutionized Bill's approach to his craft. His hand skills were soon supplemented by the mechanical skills of the ornamental turner and his acquisition of a Holtzapffel lathe transformed his work. He produced some truly exquisite items; notably his fine ivory chessmen, winning him many prizes in the competitions of the Society and of the Worshipful Company of Turners. In 1983 Bill was made a Freeman Prizeman of the Company and in 2001 he was made a life member of the Association of Woodturners of Great Britain. Bill was also a member of the Register of Professional Turners.

Bill was famous for his writings and his teaching. He kept a daily journal for more than 50 years and this provided him with the material for a long-running series of articles that he wrote for the Bulletin of the Society, for which he was made an Honorary Life Member in 1986. He wrote many articles also for Woodturning Magazine and his articles were so well received that they were published in two books: Notes from the Turning Shop (1996) and Further Notes .from the Turning Shop (1997). As a teacher, Bill was superb; just like your favourite uncle, he would gently show how to ·get it right' and all the time telling anecdotes about his life and experiences, particularly those involving his old Dad. Bertram. His specialty was hand-chased screw threads, and he could do them almost without looking.

He was a gentle soul, with a quiet demeanor and a sparkle in his eye. He was always fun to be with and he was one my favourite uncles.