Below is an excerpt of a tribute by David Wood-Heath from the Society of Ornamental Turners Bulletin #128: 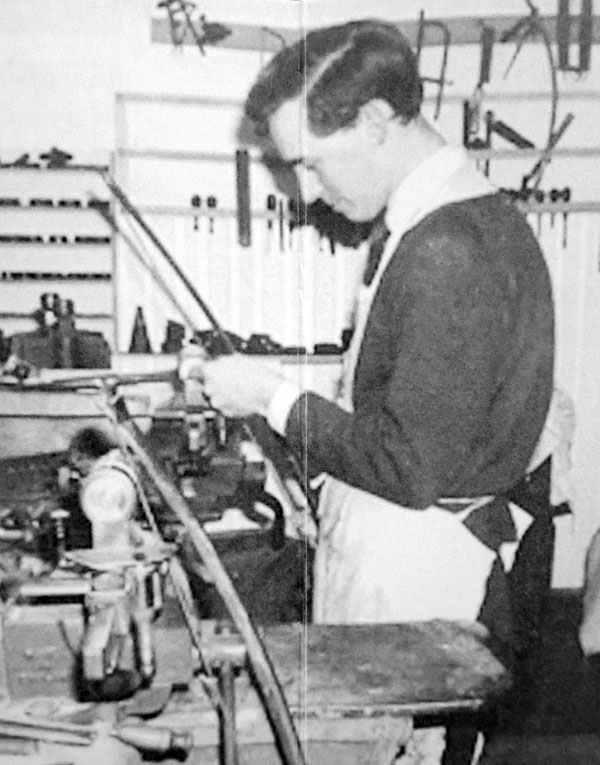 I feel very privileged to have the opportunity to write this obituary for Martin Matthews, who died aged 78 years on 31st January 2013. There are others who could do more justice to Martin in the many facets of his life, however I will do the best I can on the subjects by which I knew him.

For as long as I can remember, I had collected pocket watches and shared my interest with other collectors, including Alexander [Alec] Marsden who sadly died on the 26th of January this year, just five days before Martin.

I recall, in 1985, I had acquired an English silver hunter fusee lever watch with an engine turned case and dial. Intrigued by this, I asked Alec how it was done and where could I find out more. He said, "Come with me on Saturday to a meeting of the Society of Ornamental Turners. If we are lucky there will be a man there who knows and I will introduce you." I was fortunate to be introduced to the 'man who knows' -- Martin Matthews; he really did know and this introduction kindled a long friendship which I greatly valued.

In recent years, as his health deteriorated, l would take Martin to meetings of the Society of Ornamental Turners and would enjoy his conversation and wide ranging discussions on many subjects during our journeys. His views were invariably sound, humane and good-humoured.

Martin was the author of the one and only book on Engine Turning, aptly called Engine Turning, The Tools and Technique 1680-1980. This book was self-published in 1984 and is much sought after; a delightful work which I believe can be enjoyed by anyone, even if they have no prior knowledge, nor interest in the subject. It covers not only a broad scope on engine turning machines, techniques and typical products such as watch cases, but It also ventures off into the subject of security printing, including the production of early postage stamps, such as the 'penny black.' These were printed using engine turned roller dies. The book also covers other historical anecdotes and delightful byways of related subjects.

Martin was also the initiator and subject of a number of video films including "Four Generations of Watch Case Making" (1999) and "Engine Turning (2006) which was extremely informative, evocative of a bygone era and a delight to watch

He was rightly proud to be the fourth generation of watch case makers in his family and sadly he was to be the last. He was keen to pass on the knowledge of his skills and was very generous and open in his endeavours to do so.

In addition to making new cases for historic watch movements, thereby resurrecting many old timepieces from unusable retirement and turning them into living time-pieces for their owner to carry and treasure, Martin could renovate a watch case, seemingly battered beyond redemption and return it to pristine newness; a feat I have been privileged to observe. l noted that sometimes he would do it in a manner and use a technique which was exactly the reverse of what l had expected! He would smile gently and explain how and why.

Martin will be remembered by all who knew him, in this country and beyond, as a very highly skilled and modest man, a committed Christian, a kind and good man. His abilities and personality will be sadly missed by his family and friends an by those who knew of him only by his reputation, books and videos.

I now think of Martin like one of the old watch cases brought to him for repair, somewhat worn and tired from the vicissitudes of life, but now taken up by his maker to be made perfect again.