Below is an excerpt of a tribute by Jon McGill from the Society of Ornamental Turners Bulletin #129: 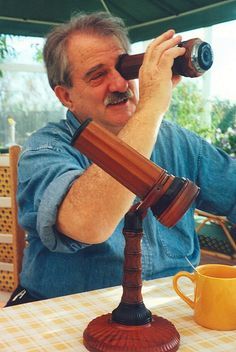 With the recent passing of Paul Fletcher, the art and craft of ornamental turning has lost perhaps one of its most inventive practitioners in living memory. Those of us who had the privilege of knowing Paul recognize that few have pushed the creative boundaries of OT in a way that he did. When Holtzapffel subtitled his fifth tome The Principles and Practice of Ornamental Turning or Complex Turning he could not have known that a century later a certain Paul Fletcher would latch on to the term 'complex' in a way that few before him ever did.

Paul enjoyed the 'puzzling out' of how to make something. His ability to visualize in 3D, combined with a keen sense of math and geometry, his dexterous manipulation of tools, and his ingenious ability to devise a specialized jig, set his skills apart and produced numerous award winning designs over the decades that he was involved with OT. Paul won most of the major medals, cups and awards given by both the Society of Ornamental Turners and the Worshipful Company of Turners. Entrants are generally allowed to win a medal once and after that are awarded Certificates of Merit if they might have won that same medal again on a given day. Paul took home numerous Certificates of Merit over the years.

From his first ornamental lathe, his cherished Munro, to "... the best lathe ever made by Holtzapffel," his superb rose engine #1637, Paul made the most of his machines and apparatus. If Paul did not have something, or couldn't buy one, he invented and built it. He used a cable, pulleys, clothes hanger and a bicycle sprocket to add a "Spiral Apparatus for a Cyclist's Wet Saturday" to his Munro lathe. After thorough testing, he documented and shared it for others to try (SOT Bulletin #82). He applied his ingenuity and persistence to OT until he conquered an idea or technique. Once, upon being shown a photo of a rectangular Kuroda Tatsuaki lacquer box, he immediately embarked on trying to reproduce it on his lathe, and whereas most would never know what to do which one, he found it almost indispensable.

His arsenal of cutters, many made by him, were each devised with a specific design goal in mind. He collaborated on numerous cutting frame designs and even produced a clever round shank UCF, he affectionately named "Spitfire' after the Jabroc used in both the body of his UCF and the original propellers. He was particularly proud of his mastery of 'geoflowers,' a complex pattern which he explored exhaustively, and devised elaborate chucking methods to allow placing them in any position on a given project.

Paul was the first international member to join the Ornamental Turners International, as well as the first person to be awarded an honorary lifetime membership in the OTI when the award for Lifetime Achievement and Contributions was created in 2006.

A personal goal Paul was able to realize was his vision of bringing OT to the masses with an idea for a "people's rose engine." Paul's original conceptual design, which led to the publishing of plans for the MDF rose engine lathe by the American Association of Woodturners in 2007, helped bring OT within reach of many turners. His desire to share his passion for OT drove him to devise a design simple enough that anyone could build a lathe and experience the same gratification he derived from using his rose engine.

Paul led a colorful and storied life, with passions ranging from sporting guns and fast cars. to model boats, watches, and stamps. He was as eclectic in his interests as he was passionate. Once he discovered OT he knew he had found something to captivate him on every level. He thoroughly enjoyed the camaraderie and collaborations with fellow turners, as well as posing challenges to try and outwit them. He relished the arrival of computers and the internet, which made the world smaller and made it possible for him to befriend kindred spirits regardless of timezone. Those of us who knew him will remember and miss him greatly.