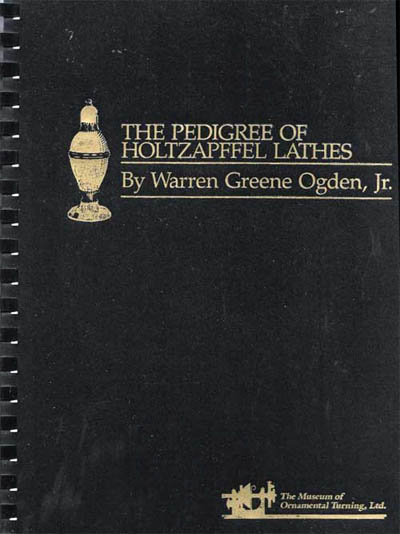 Ogden lived in North Andover, Massachusetts where he was a top-level engineer and precision instrument maker. He worked on many U.S. government projects, especially during World War II and later for NASA. While not noted for the actual performance of ornamental turning, Ogden was as a master toolmaker who provided invaluable assistance in making and repairing broken or missing parts for ornamental turning lathes and apparatus.

But he would be most remembered for his work in documenting the Holtzapffel family genealogy and their achievements in designing and making ornamental turning lathes, which he began in 1952. Various portions of his research were published in the Society of Ornamental Turners Bulletins which were eventually expanded to a complete volume, The Pedigree of Holtzapffel Lathes, published in 1987. Much of the material on the history that appeared in Knox's Ornamental Turnery came from Ogden's extensive research and from his association with the British Science Museum.

His most treasured possession was the famous and fully equipped combined Holtzapffel rose engine / ornamental turning lathe No. 1636. He also maintained a magnificent library of more than 3000 books along with one of the finest workshops. For a tribute to Ogden, see the Society of Ornamental Turners Bulletins #85. A complete, detailed biography of Ogden is found in the preface to The Pedigree of Holtzapffel Lathes.