There were four generations of the Evans family in the ornamental lathe manufacturing business: John, his two sons, William James and John Henry, a grandson also named John Henry, and a great grandson named William Henry. While the names may be a little confusing, the following details clarify the lineage.

John Evans (1787–1858)
Originally from Wales, John Evans is said to have worked for the Holtzapffel firm before starting his own ornamental turning manufacturing company in 1810. He advertised as "Engine, Lathe & Tool Manufacturer and General Machinist."
John Henry (1819-185?)
John Henry is known to have worked with his father in the business from 1838 until 1849.
William James (1817-1875) 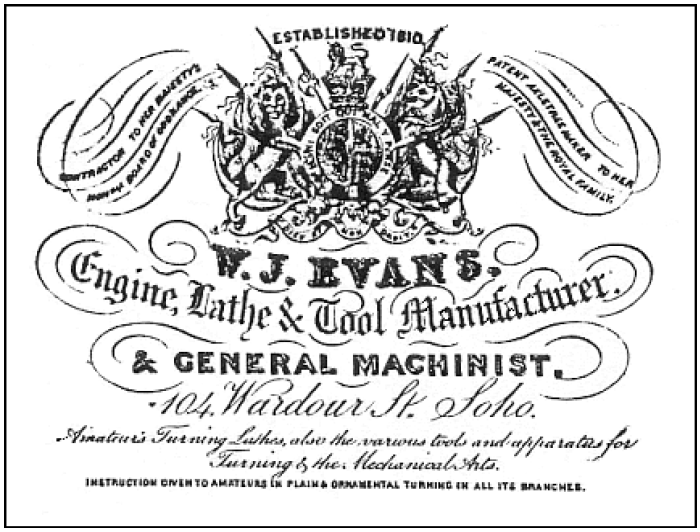 W. J. Evans trade label
William is known to have partnered with his father in the business from 1843, possibly having spent his earlier years working elsewhere in the trade. He took over the business when his father died in 1858, as his younger brother who worked for the firm is believed to have died by this time.
John Henry II (1843-1919) 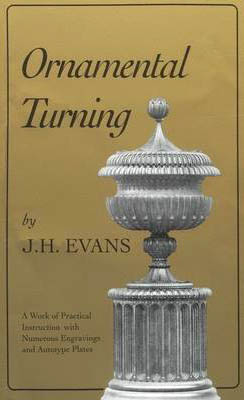 John Henry II took over the business in 1874 shortly before his father William died. He was a prolific writer, having contributed more than 300 articles to the "English Mechanic & World of Science" magazine from 1881 to 1916. He also wrote several articles for the "Forge and Lathe" as well as one for the "Journal of the London Amateur Mechanical Society" on his compensating index mechanism. His major work was the book published in 1886 simply titled Ornamental Turning which covered the subject in complete detail (second only to Holtzapffel's Volume V) and provided a well-written, easy to understand reference on how to use an ornamental lathe. It contains 190 detailed line drawings and 19 photos along with information available nowhere else, including a chapter on Dawson's geometric slide rest, design improvements of many types of OT apparatus, and a brief chapter on electrotyping.

J. H. Evans found time to give lessons in ornamental turning and enjoyed sharing details on every aspect including many "secrets" of the lathe maker’s art. He produced high quality ornamental turning equipment, priding himself on the improvements he created over the Holtzapffel lathes. His firm produced a large number of lathes and related turning apparatus, although only around fifty survive. The highest numbered lathe known to still be in existence is No. 1296, made in 1892. (It is possible that only certain ranges of numbers were issued so as to give the impression of larger than actual production figures or that numbers were allocated to everything made, not just lathes.) 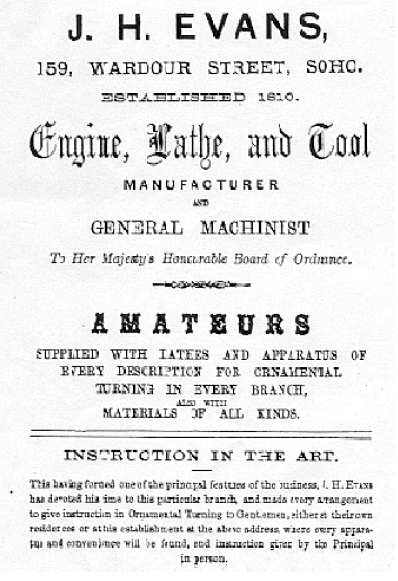 In 1890, J. H. Evans formed an agreement with George James Child to become the trustee of his company, owning all of its assets, including the copyright to his book and the patents and licenses in his name. It appears this agreement was formed to create loans against the company's assets in order to pay out cash for John Henry's shares. In 1892 a lawsuit against the company prevailed and the company was ordered to be liquidated. At this point, his son William was brought into the business, if only on paper, as detailed by John Edwards in his publication John Evans & Sons Lathe Makers:

It is significant that the Court Order for the liquidation of the Company was issued on 7th July 1892, just two days after the Wardour Street tenancy had been transferred to William Henry Evans. The landlord was pressing the Company for arrears of rent and, probably, the only way to gain access to the seized property was to start a new tenancy, paying rent in advance from personal resources because the Company could not pay. 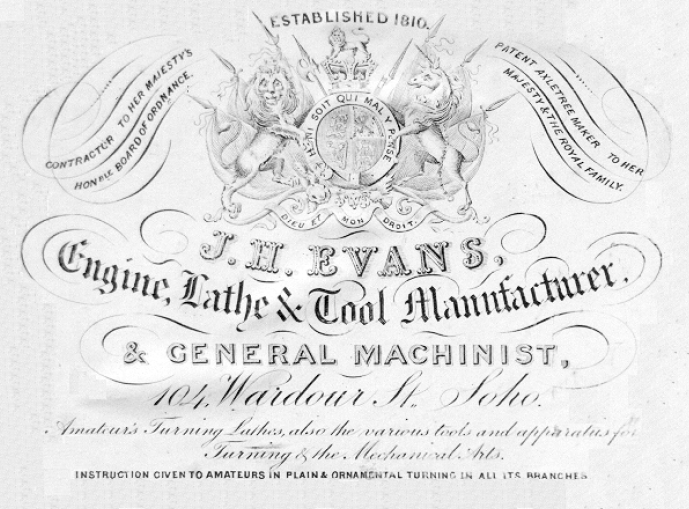 The assets of the company were finally realized by 1895 and in 1900 its documents were ordered to be destroyed. Between 1893 and 1899, apart from writing articles for English Mechanic magazine, J. H. Evans maintained a low profile. It has been said, though unconfirmed, that he may have worked for the Britannia Lathe Company during this period. However, from 1899 to 1905 he was listed in the trade directories again as "lathe maker" although it doesn't appear he achieved much success and no lathes from this period were known to have been made. Other listings as Metal & General Agent, or Engineer, also appear in later years, though it is not known for certain that this was the same John Henry Evans.

William Henry (1869-?)
Son of John Henry II who was brought into the business only very briefly as detailed above. 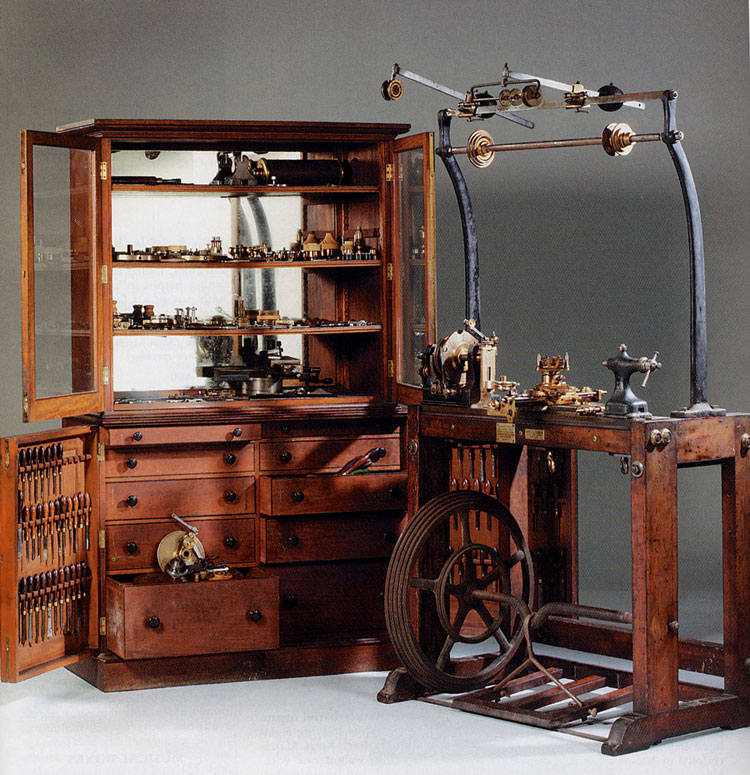 Evans lathe #1261, made in the late 1870s, was owned for many years by S G Abell, a founder member and past President of the Society of Ornamental Turners. This outfit was sold at Christies auction house in April 2000.