The House of Fabergé

The House of Fabergé spanned multiple generations with Gustav Fabrier establishing the firm in the mid-19th century. Over the following 100 years they employed more than 35 highly skilled workmasters. 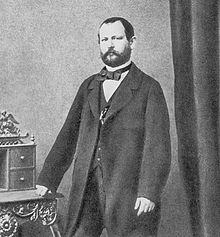 Portrait of Gustav Fabergé, 1860s.
Gustav Fabrier was born in 1814 but between 1825 and 1828 the family’s name had evolved to become Faberge (without the accent mark). In the 1830s, Gustav Faberge moved to St Petersburg, the capital of Russia, to train as a goldsmith under Andreas Ferdinand Spiegel, who specialized in making gold boxes. He continued his training with the celebrated firm of Keibel, goldsmiths and jewelers to the Tsars. By 1842, he earned the title of "master goldsmith" and opened his own retail jewelry business which he decided to call Fabergé (adding the accent in an attempt to give the name a more appealing character to Russian nobility).
Peter Carl Fabergé (1846-1920) 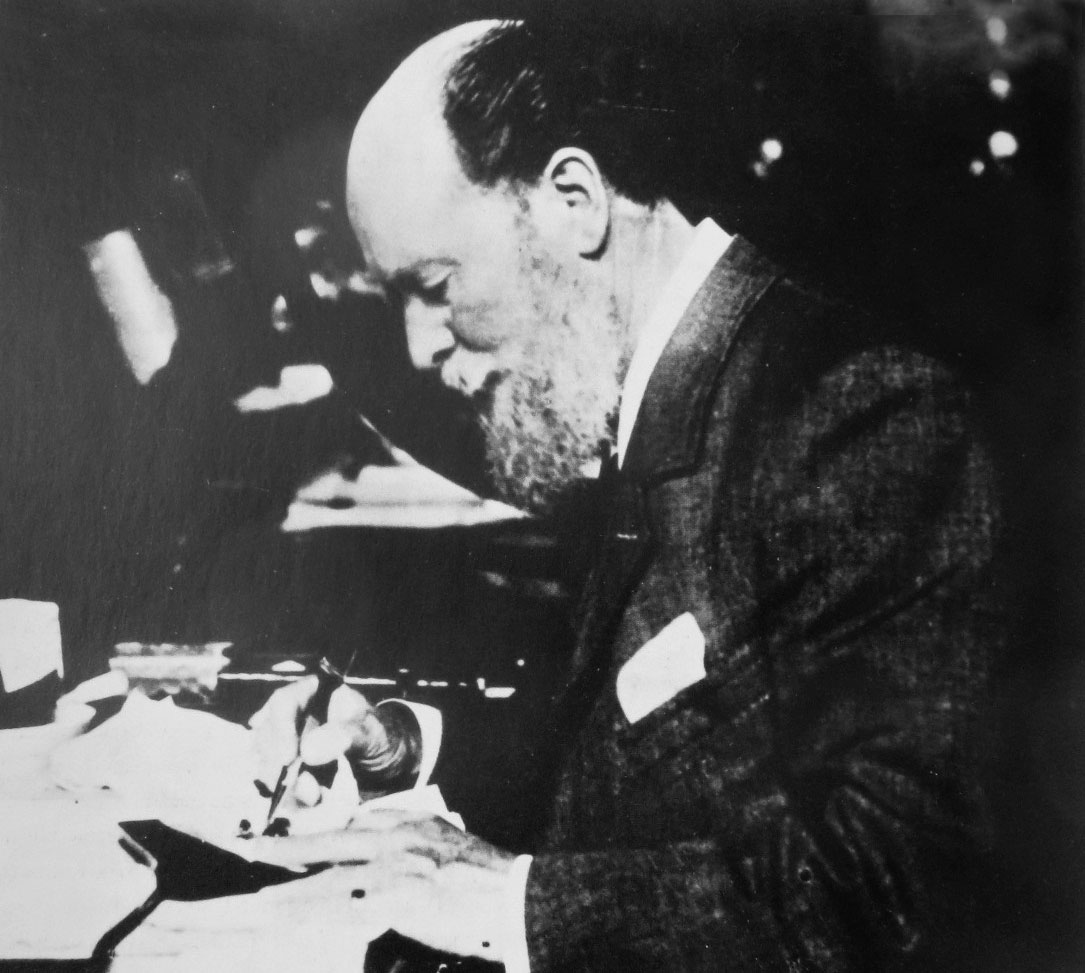 Photo of Peter Carl Fabergé at work
Carl was born in St. Petersburg. He began working for his father's firm in the mid-1860s, and later took over its management in 1872. Fabergé was a gifted entrepreneur: rather than make the jewelry himself, he delegated production to a head workmaster, who in turn supervised the creation of all the items made at various workshops. His success came from cultivating the best artisans, demanding a technical perfection beyond compare, developing innovative designs, and ingratiating himself to the officials of the Imperial Cabinet who would later help his ascent to fame.

By 1869, most presents to the Imperial Couple and gifts to visiting Heads of State were ordered from Fabergé. In 1884, together with his younger brother Agathon (1862-1895), Fabergé began designing an innovative line of objects that featured exceptional hues of enamel with detailed guilloché engraving, carried out by a new workmaster Mikhail Perkhin (active 1884-1903). This work quickly gained the highest recognition and the orders began pouring in, including the first commission for his incomparable series of imperial Easter eggs. At the peak of his success, the House of Fabergé supplied most of the gifts exchanged by relatives of the imperial families in Russia, Denmark, Germany, and England.

In the early 1900s, the House of Fabergé had won international awards and become one of the largest jewelry firms in Europe, employing some 500 craftsmen and designers who had produced more than 150,000 jewels, silver tableware items, and objects d'art. But World War I was tragic for Russia. Jeweled articles were replaced by much simpler works made of steel, brass and copper, most of Fabergé's specialist craftsmen were drafted into the army and his workshops were converted into factories for making hand grenades and artillery shells. By 1916, all foreign operations were repatriated to Russia to finance the war effort and the House of Fabergé became a join-tstock company. After the 1917 Revolution, the Bolshevik takeover, and the murder of the Imperial Family, the House of Fabergé was nationalized and its stock was confiscated.

In November 1918, Fabergé fled St. Petersburg to Germany. In June, 1920 he travelled to Pully, Switzerland to be with other family members where he died within a few months.

Eugène Fabergé (1874-1960) & Alexander Fabergé (1877-1952)
After the revolution, two of Peter Carl Fabergé’s sons, Eugène and Alexander, managed to escape the USSR and settle in Paris. In the early 1920s they established Fabergé & Cie which traded in and restored Fabergé objects, as well as general jewelry items. After World War II, they learned that Sam Rubin of the United States had established Fabergé Inc. which was selling perfume under the Fabergé name and had registered Fabergé trademarks for jewelry items. In 1945, the brothers initiated legal action against Fabergé Inc. but, unable to afford the protracted and expensive litigation, were forced to settle out of court, ceding the rights to the Fabergé name in 1951 for a mere $25,000. In 1964, Fabergé Inc was sold to a cosmetics company ($26 million), and in 1984 sold again to a clothing company ($180 million), which sold again in 1989 to Unilever ($1.55 billion).
Agathon Fabergé (1876-1951)
Agathon shared the same name as his father's brother. Joined the firm after his namesake's death in 1895. Agathon did not escape with the rest of the family during the Bolshevik Revolution. He was imprisoned until 1921 and finally escaped the country in 1928.
Nicholas Fabergé (1884-1939)
Nicolas was the youngest son, who was sent from St. Petersburg to England to represent the family business in 1903.
Theo Fabergé (1922-2007)
Theo was the only son of Nicolas. Because he was born out of wedlock, he was raised by his aunt not knowing the details of his family's heritage.

In January 2007, an investor group Fabergé Ltd. acquired Unilever’s worldwide portfolio of Fabergé trademarks, licences and associated rights with the intent that all future development of the Fabergé name reflects the original heritage of excellence in creativity, design and craftsmanship.

This constitutes the reunification of the House of Fabergé and a new chapter in its history. My father, Theo Fabergé, grandson of Peter Carl Fabergé, passed away on August 20th, 2007. It is poignant that, only days before he died, both he and I entered into the arrangements reuniting the family and the Fabergé name.


Artisans from the House of Fabergé 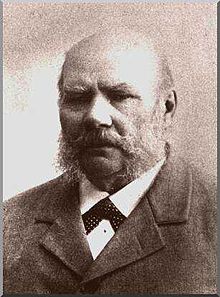 Holmström was a Finnish silversmith and goldsmith. Born in Helsinki, Finland, he apprenticed at the workshop of jeweller Karl Herold in St. Petersburg from 1845—1850 master and became a master with his own workshop in 1857.

Senior member of Fabergé's workshop, Holmström was head jeweler and also produced parts for various items. He died in St. Petersburg. His son Albert Holmström (1876-1925) continued in his father's footsteps after his death and used the same mark, AH. 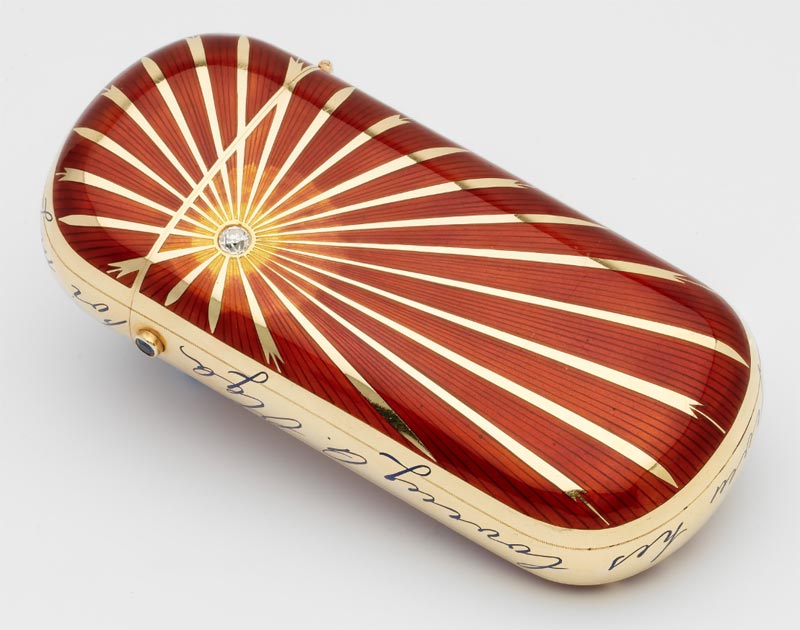 His daughter Hilma Alina Holmström (1875-1936) and granddaughter Alma Pihl (1888-1976) were both jewellery designers and workmasters at Fabergé. Alma designed the Winter Easter Egg and the Mosaic Easter Egg. Grandson Oskar Woldemar Pihl (1890-1959) was also a jeweller and goldsmith.

Kollin was born in Pohja, Finland. He completed his training as gold and silversmith with Alexander Palmén in Ekenäs in 1858 before travelling to St. Petersburg. Kollin qualified as workmaster in 1868 at August Holmström's workshop and, in 1870 opened his own workshop in St. Petersburg. Kollin worked for August Holmström and for Carl Fabergé, and was soon put in charge of all Fabergé workshops, a post he held until 1886 when he was replaced by Michael Perkhin.

Kollin was Fabergé's first chief jeweler. He specialized in gold and silver articles, most of them in an archaic style of the period. The items produced by Kollin for Fabergé before his departure in 1886 generally bears his initials EK, together with Fabergé's hallmark and are frequently found in a Fabergé box. (Evidently this pre-dates a change of hallmarks in 1899. Objects bearing EK mark only and produced between 1885 and 1899 are considered the work of an independent artist, unless cased by Fabergé.) 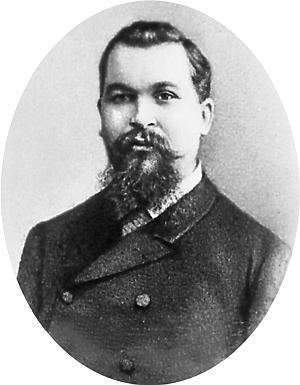 Perkhin was a Russian jeweler. Born in what is the now Republic of Karelia. Initially, he worked as a journeyman in the workshop of Erik August Kollin. In 1884, he qualified as a master craftsman and his artistic potential must have been obvious to Fabergé who appointed him head workmaster in 1886.

Perkhin's workshop produced all types of objects in gold, enamel and hard stones. All the important commissions of the time, including some of the renowned "Fabergé eggs" were made there. His period as head Fabergé workmaster is generally acknowledged to be the most artistically innovative, with a huge range of styles from neo-Rococo to Renaissance. 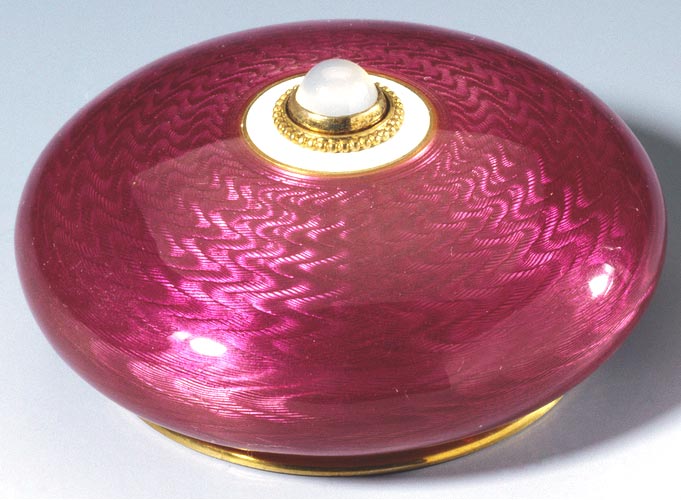 Wigström was a Finnish silversmith and goldsmith who became one of the most important Fabergé workmasters along with Michael Perkhin. Wigström was chief assistant to workmaster Perchin until his death in 1903, at which point he was became the head. Wigström and Perkhin were the two workmasters responsible for producing almost all the imperial Easter eggs. Wigström created some of the Fabergé firm's finest cigarette cases and boxes, largely in a neo-classical style.

Alma Theresia Pihl was the other of two female designers at Fabergé. She was the daughter of goldsmith Knut Oskar Pihl (1860—1897), granddaughter of Fabergé head jeweler August Holmström and the niece of Fabergé jewelry designer Hilma Alina Holmström (1875—1936) [1] and sister of jeweler and goldsmith Oskar Woldemar Pihl.


Other websites with related details