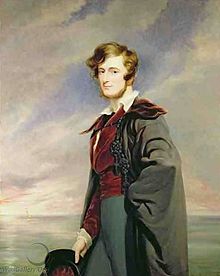 Portrait of Lord Craven by Sir George Hayter, 1830.
William became Lord-Lieutenant of Warwickshire, Recorder of Coventry and High Steward of Newbury. In 1848, he purchase Holtzapffel lathe No. 1935 to add to the family collection. This was one of the only two 5-1/2” lathes Holtzapffel made. It seems also to have been a somewhat sophisticated machine as it had a back-gear or slow motion incorporated within the headstock pulley (shown in Vol IV, pp. 113-114). (This lathe was sold to the Welsh Folk Museum in 1977.) He also bought No. 2103, perhaps to use for preparing work for ornamental turning, as it was the simplest and cheapest of plain lathes. He was a friend of Ms. Gascoigne of Parlington Park, Aberford, Leeds and when she published her Handbook of Turning she dedicated it to him.
George Grimston Craven, 3rd Earl of Craven (1841–1883)
George was also a soldier, Lord-Lieutenant of Berkshire and Deputy Lieutenant of Warwickshire. Although a practicing turner, he added only one new Holtzapffel lathe, No. 2216, to join the others in a specially adapted turning room at Coombe Abbey. After his death, this lathe was returned to Holtzapffel factory for resale.
Osbert William Craven (1848-1923) 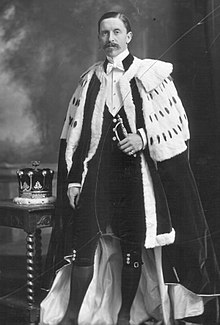 Photograph of the Earl of Craven, 1902.
William George Robert Craven, 4th Earl of Craven (1868–1921) apparently had no interest in turning so the lathes went to his younger brother Osbert, who did enjoy turning. At Ashdown Park house in Berkshire where he lived, he didn't buy any new lathes, instead using those at hand to their fullest . His skills covered woodwork, turning, book-binding and leatherwork, and also served in the Berkshire Militia for 34 years retiring as Lieutenant-Colonel. He was friends with the family of Lady Gertrude Molyneux (Crawford) and some of his more modem looking turnings in the photos are very similar to her work.
Rupert José Evelyn Craven (1926-?)
The second son of the 3rd Earl of Craven was named Rupert, who was the father of the Society of Ornamental Turners member lieutenant-commander Rupert José Evelyn Craven, RN. He has revived the family interest in ornamental turning, though unfortunately had none of his family's lathes. However, numerous turned items from previous generations showing great skill have survived, as well as photos published in the Society of Ornamental Turners Bulletins #91.