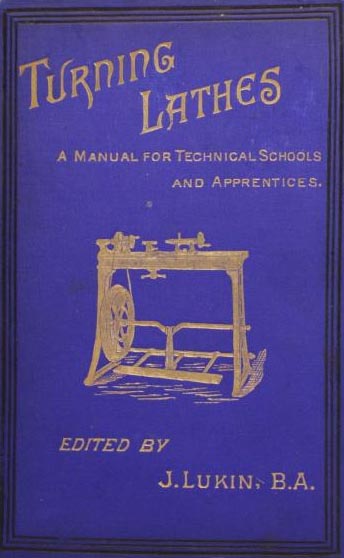 Lukin was a student at the Marlborough House Grammar School where, to his delight, he was granted access to the headmaster's lathe room. Rev. Thomas Meyler had purchased Holtzapffel lathe No. 1417 in 1830 and was considered a splendid mechanic. It was there Lukin was instructed in ornamental turning. He also attended Brasenose, Oxford, graduating in 1849. He was described as having been "a rector of some half-dozen parishes and then a very retired and elderly chip off the clerical block."

In fact, Lukin resided at Felbrigge Lodge near Southampton where he became an accomplished turner and prolific writer. He authored numerous books on turning published between 1868 and 1905, including: Turning Lathes - A Manual for Technical Schools and Apprentices; Turning for beginners; Possibilities of small lathes; and Simple decorative lathe work. He also wrote anonymously under several pseudonyms, such as The Lathe and its Uses; Turners Manual; Turning for Amateurs; Amateur Mechanic's Workshop and others.

Beyond turning, Lukin wrote books on a variety of subjects including woodworking, mechanical, electrical and steam. He became one of the most popular authors and proponents of what the nineteenth century’s burgeoning middle class termed “Amateur Work.” His writings were anticipated and sought after by people of all ages and for many decades throughout the nineteenth century.

Lukin also wrote articles in several periodicals, including "Journal of the Amateur Mechanical Society" (he was the Editor of Volume I), "Amateur Work Illustrated," and "English Mechanic" (some of his books first appeared serially in this magazine).

In addition, Lukin was an engineer who produced lathes and turning apparatus. The Britannia Engineering Company of Colchester, England shows a picture of the Lukin ornamental turning lathe in its catalog, which appears similar in construction to other 19th century lathes. However, the number produced is not known and few (if any) survive today.